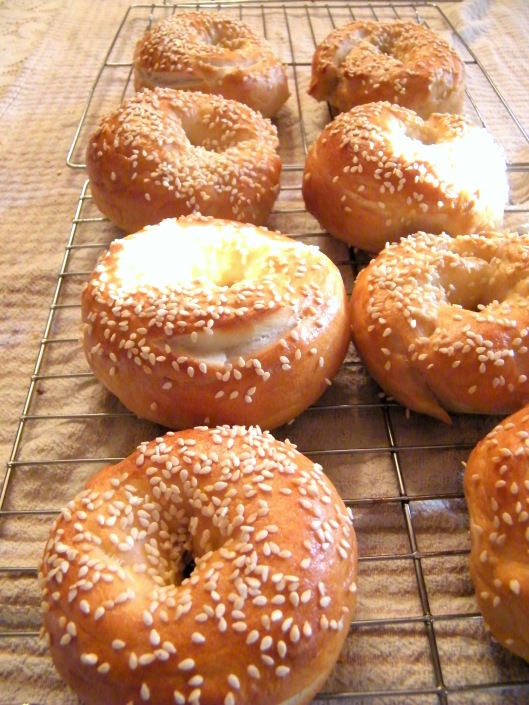 This week’s Baking with Julia recipe is a bagel that’s described in the book thusly: “boiled, then baked – with a cakey, open sponge, they are not heavy, stretchy, or chewy.” Not chewy? Isn’t chewiness the essence of all bagels? (I exclude most supermarket bagels, which a bagel-loving friend of mine describes as “bagel-shaped bread.”) Colour me skeptical.

I think it’s time for a bagel throwdown. The bagel recipe that’s gotten the most buzz in recent years belongs to Peter Reinhart, so we decided to put Julia’s recipe up against his and see which one came out on top.

We’re taking some inspiration from the most famous of bagel head-to-heads: New York versus Montreal. It’s probably no surprise that we’re on Adam Gopnik’s team for this one. Here’s what he had to say in Martin Connelly’s article, Bagels, Toasted, from The Morning News:

I have few fixed convictions in life, but one of them is that Montreal bagels are not just better than New York bagels or any other bagels, they’re so much better that I’m on kind of permanent house arrest about eating any other kind of bagel—I just can’t eat a New York bagel. If you toast it and there’s enough cream cheese and nova on it, it’s tolerable, but it just isn’t a bagel.

It doesn’t stop there, either. Once the question of Montreal’s supremacy is settled (what do you mean it’s not settled?), there’s the age-old Fairmount versus St-Viateur question to be tackled.

When we went to Montreal a while back, we bought a bag each from Fairmount and St-Viateur (for scientific purposes only, of course). St-Viateur won, hands down. It’s an experience not to be missed if you’re there. If you go around the back, you might even be lucky enough to catch a glimpse of them loading bagels into that famous wood-fired oven.

But, let’s get back to our own little home-baked contest. There are small differences in the rising and shaping method for our contestants, but the primary difference lies in the ingredients. The bagels in Baking with Julia (from Contributing Baker Lauren Groveman) have shortening and sugar, while Reinhart uses malt syrup (or honey, in our case). Each poaching liquid uses the same sweetener as the bagels. We substituted the instant yeast called for in Reinhart’s recipe with dry active yeast, so they were equal on that front.

I prepared the dough for each of the bagel recipes the night before, as my nieces had only a limited amount of time for baking this month and we were tackling a lot together the next day. Groveman’s recipe produced a dough that was springy and incredibly active. Reinhart’s dough rose well, but seemed sluggish in comparison, even though the yeast was from the same batch. 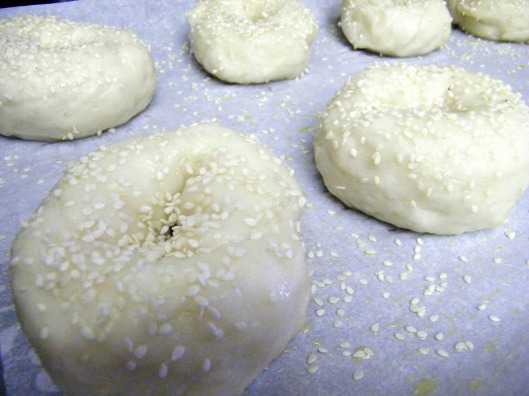 Both were easy to work with, though everyone preferred Reinhart’s method for shaping the bagels over Groveman’s. We had two pots of poaching liquid on the stove, but apart from that, the method for boiling and baking each batch of bagels wasn’t that different. Once baked, Groveman’s bagels were larger and and a little rough around the edges, while Reinhart’s bagels were compact, tall, and smooth.

All this is preamble, of course, because what matters most is taste. Reinhart’s bagels had a nice crust with a little sweetness from the honey, while inside they were dense, soft, and chewy all at once. Groveman’s bagels were missing that sweetness in the crust, but had the taste and texture you expect from a bagel. We all liked both recipes, but Groveman’s won for overall taste, just slightly. Next time I make bagels, I’ll use Reinhart’s poaching liquid and Groveman’s recipe. I think the honey helps make the crust perfect.

Will these homemade bagels take the place of Montreal bagels in my heart? No, but good bagels can take a little effort to obtain in this region, so it’s good to know that it’s easy enough to make some delicious and satisfactorily bagel-y bagels at home.

This week’s host is: Heather. You can find everyone’s links here: Bagels

We'd love to hear from you. Cancel reply

The Family That Bakes Together

Promote your Page too